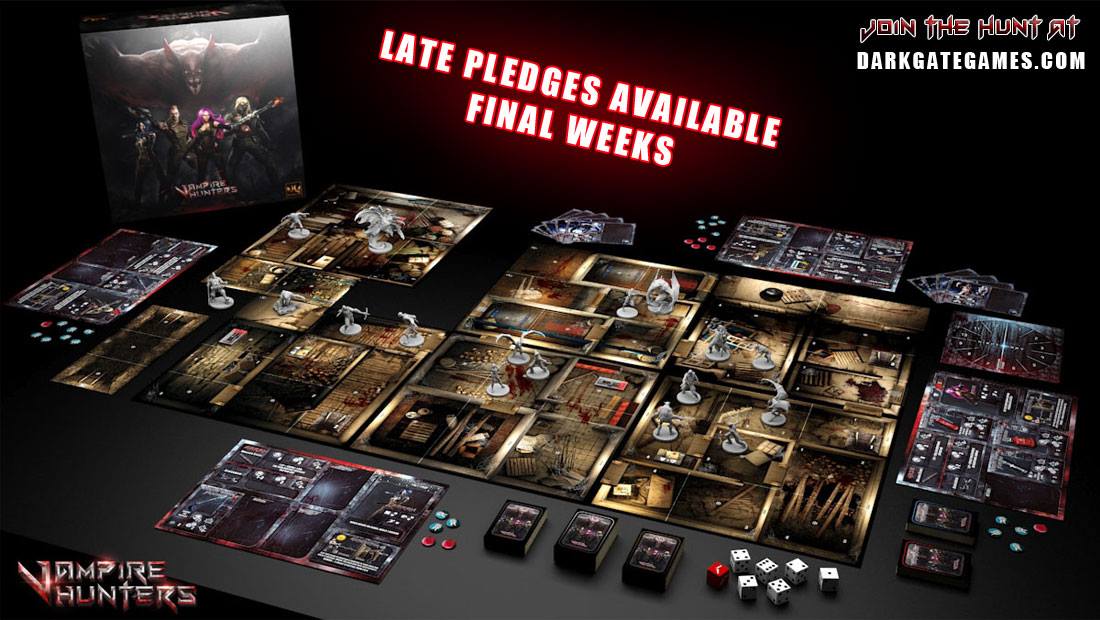 I was tagged in a facebook post today for the Vampire Hunters Kickstarter.  I have to say, this one passed me by when it was live last year and in all honesty I wasn’t planning on backing any more for the immediate future.  Partly as I have several waiting, and partly because one is Super Dungeon Legends, which is looking like it will be 6 months to a year later than the original year deadline.  I don’t gripe too much, it is the nature of crowdfunding and a lot of stretch goals were unlocked.

However, I am really glad I was tagged, as this game looks awesome!

When I was looking at the Kickstarter page and the Dark Gate page (The Company that produces this), I was immediately impressed with the array of hunter and vampire miniatures.  More than that, I really liked the look of the tiles that came with the game; they really do give the feel of a vampire lair dungeon crawl.  It also doesn’t hurt that I currently GM a Vampire the Masquerade game and can see me using them from time to time as a visual aid.

I’ve only just had a chance to watch the first video in the Dark Gate how to play series, and it did not disappoint.  The game is fully cooperative and appears to have a design style similar to Zombicide, and a play style that is a mix of Zombicide and a dungeon crawl game like Descent or Undercity.

Can’t wait for it to arrive, so that I can give it a proper review.  If you’ve got a spare bit of cash, you can still pop across to the Dark Gate website to put in a late pledge (and all unlocked stretch goals which you can find HERE on the Kickstarter, and the pledge manager should be open Feb 2017 (I sent them an email and they replied within an hour) so you can add the optional extras.  Personally, I fancy the Castle Dracula expansion.